LatencyMon checks if a system running Windows is suitable for processing real-time audio and other tasks. LatencyMon analyzes the possible causes of buffer underruns by measuring kernel timer latencies and reporting DPC and ISR execution times as well as hard pagefaults. It will provide a comprehensible report and find the kernel modules and processes responsible for causing audio latencies which result in drop outs. It also provides the functionality of an ISR monitor, DPC monitor and a hard pagefault monitor.

LatencyMon will display the highest latencies of a kernel timer and report the highest execution times of ISR and DPC routines as well as hard pagefaults. In most cases it will also find the drivers and processes responsible for executing them. It will create a comprehensible report which also displays all sampled data in a detailed manner allowing you to perform in-depth analysis. 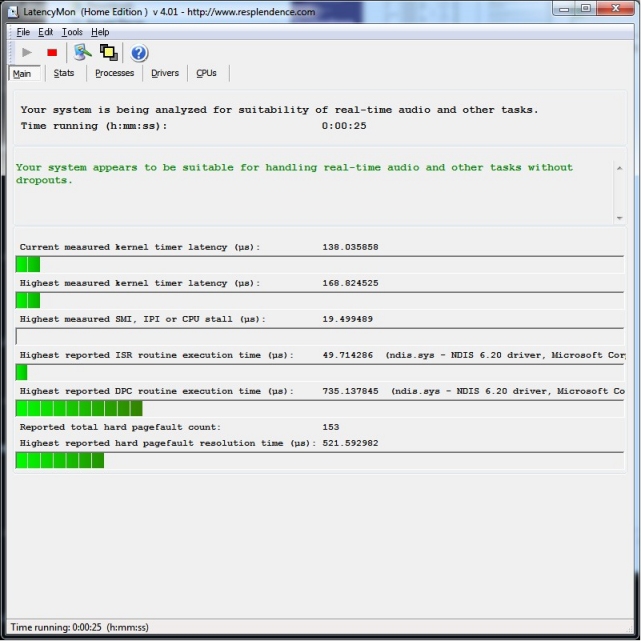 Windows is not a real-time operating system. All requests to the operating system are delivered on a best effort basis. There are no guarantees whatsoever that requests are delivered within a certain time frame, which are the characteristics of a real-time operating system. That is not a problem for most devices and tasks but this is bad news for audio applications (which are considered soft real-time) because they need to deliver data to the subsystem and the hardware in buffers several times per second. If one or more buffers miss their deadlines and are not delivered in time it has audible consequences which are recognized as dropouts, clicks and pops.


About DPCs and ISRs

The Windows thread dispatcher (also known as scheduler) which is part of the kernel executes threads based on a priority scheme. Threads with higher priority will be given a longer execution time (also known as quantum or time slice) than threads with a lower priority. However the kernel also knows other types of units of execution known as interrupt service routines (ISRs). Devices connected to the system may interrupt on a connected CPU and cause their interrupt service routines to execute. An interrupt can occur on the same processor that an audio program is running on. Any thread that was running on the processor on which an interrupt occurred will be temporarily halted regardless of its priority. The interrupt service routine (ISR) is executed and may schedule a DPC (Deferred Procedure Call) to offload an amount of work. The DPC will most likely run immediately on the same processor which means the audio application will halt until both the ISR and the DPC routines have finished execution. That is because ISRs and DPCs run at elevated IRQL which means they cannot become preempted by the thread dispatcher (scheduler). Therefore to guarantee responsiveness of the system, ISR and DPC routines should execute as fast as possible. Guidelines say that they should not spend more than 100 µs of execution time however this is often not reached due to hardware factors beyond the control of the driver developer. If execution time gets too high, the audio program may be unable to deliver audio buffers to the hardware in a timely manner. 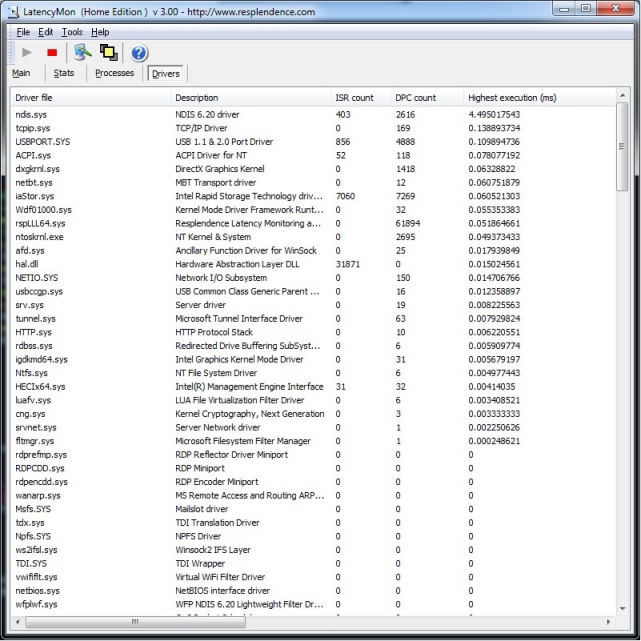 Windows uses a concept of virtual memory which relies on the page translation system provided by the CPU. Whenever a memory address is requested which is not available in physical memory (not resident), an INT 14 will occur. The OS provided INT 14 handler will decide how to proceed next. If the page in which the address resides is known to Windows but not resident, Windows will read in the required page from the page file. That is known as a hard pagefault and can take a lot of time to complete. If the page can be read in from the hard disk cache, the price will be limited. However if it needs to physically read in the data from disk sectors this takes a lot of time. If an audio program hits a hard pagefault while it is playing it will almost certainly have audible consequences recognized as dropouts, clicks or pops.

Hard pagefaults are a very common but often overlooked cause of audio dropouts, clicks and pops. They especially occur often with audio software that uses a lot of memory such as samplers. Solutions for avoiding hard pagefaults are increasing the working set of the audio application, increasing the amount of RAM or disabling the pagefile altogether. Note that if you disable the pagefile, the system may run "out of memory" because it does not have the pagefile available to swap memory to. Also the system will no longer create crash dump files in case of a system crash.